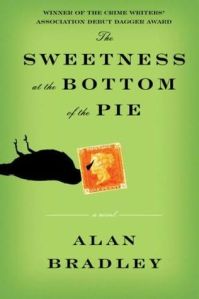 The Sweetness at the Bottom of the Pie (Alan Bradley)
I recently finished Alan Bradley´s The Sweetness at the Bottom of the Pie and enjoyed it so much that I´m willing to write a review to help it find more readers. I don´t know how well-known this book is in the US or UK but in Germany it is a new hardback release titled “Murder in the Cucumber Patch” (my transl.) featuring a cover of a girl a la Emily the Strange or Wednesday of the Addams Family. I´ve seen it a lot of times in stores and at the train station but I tend to judge books by their covers, and this one seemed to me just another fantasy book for children of which there are just too many bad and boring ones already.It was only when I saw the English edition on the internet that I lingered and read the summary and numerous reviews. And from then on I coudn´t wait to read it!

The Sweetness at the Bottom of the Pie is a detective story featuring an eleven year old girl, Flavia de Luce (yes, that name initially scared me off too!) who lives in an English mansion with her two older sisters and her father in the year 1950. Flavia is, of course, astoundingly intelligent, but she is also very likable and endearing in an obnoxious way. I would even call her cute, if you can call a character who is a chemistry genius with a passion for poisons that.
Flavia´s life is entirely too boring in her mind. Her father is never quite there, always thinking of their mother Harriet or his stamp collection; her sisters are either busy with their looks (Ophelia), or reading (Daphne), or shoving Flavia into closests, bound and gagged. So when she finds a dying man in the cucumber patch, Flavia, in true gothic girl fashion is intrigued and excited rather that scared. This is something I most enjoyed about her, Flavia is a great heroine even at the age of only eleven.

I loved this book, it is an easy read, real fun and I´d lable it cosy crime.

And for everyone who enjoys this story, it´s a series in the making. Book 2 will be released in <march!

More about the author and Flavia.

13 thoughts on “Review: The Sweetness at the Bottom of the Pie”