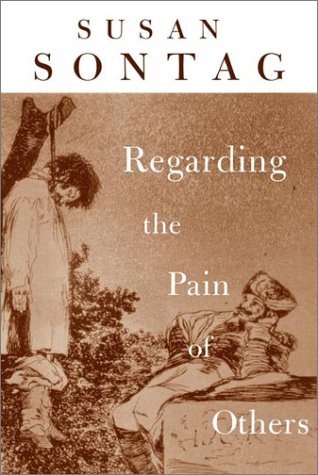 Perhaps it is a bit strange that the first work I read by Susan Sontag is also her last book, Regarding the Pain of Others. I’ve read a couple of excerpts of her writing over the years, but never a complete book or even a whole essay. To be honest, I was more than a little intimidated since she was such a brilliant theorist. But then the small library back home put this second book of Sontag about photography (after On Photography, 1977)  on a special shelf and I felt that this was a message for me.

And I’m so happy I went to the library that day, Regarding the Pain of Others was a fantastic read and I found Sontag’s writing to be clear and concise and her arguments convincing. This work focuses on war photography and especially on our reaction to those photos. Because, in our time of mass media and daily overdose of images viewed from the comfort of our mostly Western homes, how are we to respond?

Luckily for me (not having read On Photography), Sontag begins this book by looking at early instances of war photography. Fenton for example, who was sent to the Crimea to take photos to gather more positive reactions of the public to this war. Or Gettysburg, another instance of early war photography, which was also notable for the fact that the photos were mostly staged or posed (because taking photographs was still a rather slow and complicated technique). According to Sontag, it’s during the Vietnam war that war photography and its influence changes dramatically. Coverage was fast-paced and brought a remote war into American (and the world’s) households. One result of this new war photography that managed to capture so much horror and pain was self-censure. I think often it was a case of  ‘”shooting” first and then stopping to think about just what atrocities were frozen in an image. Looking at photos makes every viewer a voyeur, but is it justifiable to capture the victims while they are suffering or dying and to confront an audience with them?

The most famous war photographs are not only remarkable for the horror they capture but also for their aesthetic. Photos have a dual role, they are a source of information as well as works of art. And usually we take both roles into consideration when we look at a photo, even or especially one that shows the pain and suffering of others. We can be both repulsed by the atrocities of war and attracted by the beauty of the photo. But intriguingly, war photography should not be too aesthetic, too beautiful. There is a fine line there somewhere, because a photo that is too aesthetic draws attention to itself as a medium and shifts attention away from the content, from the pain of others. I looked at a lot of war photography while reading this book (I looked the examples mentioned by Sontag up on the internet, because one thing that is not included in this book is photos. Not one single picture apart from the cover), and certainly struggled with this. Often, very aesthetic photos grabbed my attention more, but the moment I became aware of the photo as a medium, I looked at it differently. Usually I did not resent the photo for that, because the attention was still on the suffering, but perhaps it was more powerful and terrifying because of its beauty. However, there are also other instances of war photography, ones that look amateurish and “real” and are powerful exactly because it.

Photos are always constructions, may they be staged or authentic, and the same photo means different things to different people. The same photo can be presented as pro and anti-war, as senseless suffering or heroic sacrifice:

The material gathered by photographers, which they may think of as unmasking the conflict, is of great use. Absent such a protest, the same antiwar photograph may be read as showing pathos, or heroism, admirable heroism, in an unavoidable struggle that can be concluded only by victory or by defeat. The photographer’s intentions do not determine the meaning of the photograph, which will have its own career, blown by the whims and loyalties of the diverse communities that have use for it.

The message of a photograph is not fixed, standing on its own, but the viewers bring their own experience to it and give it meaning. Often, looking at such a photo, we are pushed in a certain direction by an “explanatory” line accompanying the photo, or perhaps the political leaning of the newspaper or magazine in which we come across it. Text is more precise I think, but of course when it’s taken out of context, anything goes.

Something I love about this work is how much it is not limited to American war experiences, Sontag does not just focus on the Vietnam war or the war on terrorism. She also mentions the Bosnia war which is the first war I really remember (as it seemed to be going on all of my childhood) and I can still see the images that were constantly on tv back then (a city, darkness brightened by greenish flashes of warfare) in my mind’s eye. And as far as I remember, there weren’t a lot of images shown of victim’s. Sontag takes notice of this use images of the power of weapons, especially weapons which can be controlled from afar, but we rarely are confronted by the media coverage of the effects of this technology.

Sontag certainly won me over with this small volume! Visual culture is a defining factor of our time I think and looking at the suffering of others and then, probably disgusted at one’s powerlessness, quickly looking away is probably something every one of us does every day. It’s fantastic to read Sontag’s thoughts about it, and it makes me reflect more on my own interaction with photography. At first I felt a bit bowled over by her arguments, but I’m happy to say that I’m now recovering and my inner skeptic is back. I’m always completely terrified that someone else’s thoughts will sound so convincing that they take over and I’ll stop doubting and making up my own mind. I know, I’m weird!

21 thoughts on “Review: Regarding the Pain of Others”