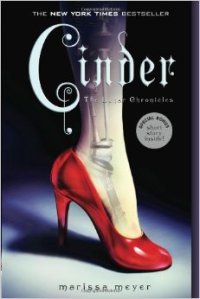 Cinder by Marissa Meyer is the first book in the Lunar Chronicles series and my first read for R.I.P. X. A YA dark fantasy tale, the book is a re-envisioning of the Cinderella fairytale starring  a cyborg Cinderella. The story is set in the futuristic  Chinese city of New Beijing, led by an emperor and populated by humans, androids and cyborgs. They are threatened by a plague-like disease, letumosis, as well as impending war with the colonizers of the moon, the Lunars.

The Cinderella aspect of the story was nicely done. In Meyer’s work, Linh Cinder is a cyborg and as such a second-class citizen, she lives with her owner/ guardian the ‘evil stepmother’, her two stepsisters and the family’s android Iko. Of course, there’s the obligatory handsome prince and the sisters’ excitement for the ball.  Important points of the fairytale, such as the shoe and the carriage and Cinderella’s servant status translate well into the dystopia and fit neatly in with the more SF parts of Cinder.

I often struggle with YA literature, though I’m trying hard to do better and give more works a chance. My problem is usually that the romance aspect is so over important and central to the plot. (I’d love recommendations for romance-less YA or barely-there romance YA!) Luckily Cinder, while definitely into wonderful prince Kai, is mostly busy with being an awesome mechanic, all the mysterious past stuff, an evil queen and letumosis.

The setting of a futuristic China was a big draw for me, but unfortunately one of the novel’s weakest points. The setting is so underdeveloped and unspecific that it might as well have taken place in any Western country. This in no way challenges the hegemonic Westerness of science-fiction and often fantasy, as Western readers we can rest assured that our view of the world, our experience is universal and will remain so. To the point that even in futuristic dystopian visions, we cannot fathom anything else.

I was also initially very excited about the post world war IV world with different nations and unions. The book touched on so many important themes like world wars, slavery, colonialism, racism and social justice. Sadly all of these remain mostly underdeveloped, even though a great premise is already there. That’s quite frustrating for me, but since it’s a series, perhaps it’ll be explored in the sequels?

All in all, Cinder is a quick read with a great protagonist and a lot of potential. I definitely recommend this to YA fairy tale and fantasy fans.