November in the book blogosphere is German Literature Month. Although I haven’t managed to participate, every year I enjoy reading the book reviews and they always remind me to give German lit another try. Being German I’ve had a lot of contact with it in school and university, unfortunately the selections were mostly dead old white dudes and the discussions often pretentious and overly intellectual. So that pretty much scared me off, even though I know there has to be amazing literature I’m missing out on. If you know of German books that go beyond the normative, I’d love recommendations!

Anyway, I chose to major in American Studies and have never really looked back. Curiously enough, it was there that I encountered German literature again, in a class on Audre Lorde and Afro-Germans. I loved learning more about Germany’s history that wasn’t white-washed, and this is a part of German literature that is right up my alley.

Germany to this day considers itself to be a homogeneous white population and while white immigrant groups are sometimes assimilated into the culture, all of us who cannot pass will forever be asked where we are from. Because there is no German concept of People of Color, only ‘people with a migratory’ background. So you will find that a lot of the books I mention here deal with having to fight for being recognized as being German. But the fact is that Black Germans have been here since the 18th/19th century (this timeline comes from available archival documents)!

Since I often look for more diverse lists of German books, but find it frustrating that they are not easy to find, I thought I’d recommend 5 books of Afro-German literature to you. I restricted myself to works that present another perspective of German history and identity and deal explicitly with race (and are available in English/ English translation). Not because I require so-called minority authors to write about being Othered, but because it is a) a personal preference of mine to find similar experiences I can connect to and b) because I want Germans and everyone else to realize the diversity of German life and identity. 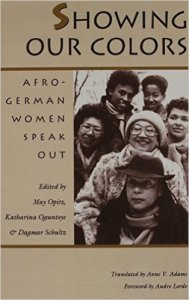 This ground-breaking publication from 1984 is edited by May Opitz (Ayim), Katharina Oguntoye and DagmarSchultz. Showing Our Colors collects stories from Black Germans that are bitter reckonings with their experiences of being made Other in post-WII Germany. 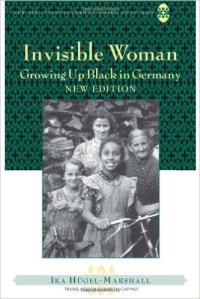 Ika Hügel-Marshall’s Invisible Woman: Growing Up Black in Germany is her memoir of growing up in Germany as what was then called a “Brown Baby.” These children of white German women and African-American soldiers complicated notions of Germanness in the especially problematic society of post-WWII.

Also by Mail by Olumide Popoola is a play about family first of all, but also about Black German identity and being the outsider. I’ve talked a bit about this one here.

Blues in Black and White is a collection of the works of Black German writer and activist May Ayim. She was part of the Afro-German movement in the 80s and 90s and published amazing poetry, some of which has luckily been translated into English. She’s one of my favorite poets. 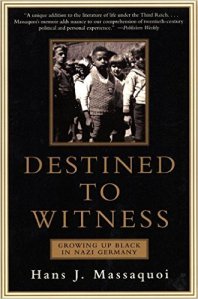 Destined to Witness is a memoir by Hans J. Massaquoi, which chronicles his experiences as a Black German during the Third Reich and his later life in Liberia and the US. Massaquio’s work makes visible the experience of Black Germans during the Holocaust and his difficulty in fitting in any category. I recommend Clarence Lusane’s study Hitler’s Black Victims as a companion read to this.

I hope you’ll find something for your tbr in this list. I’m planning to do a series of ‘5 on a Theme’ posts and to make lists for diverse German literature that cover other identities and experiences, if anyone is interested in that. Also, I’d love some recommendations for diverse German books!

11 thoughts on “5 on a Theme: Afro-German Literature”