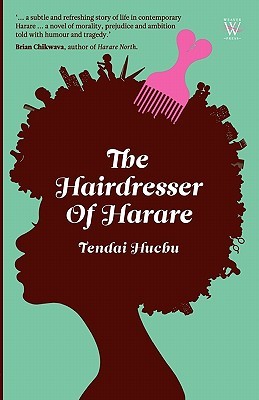 The hairdresser of Harare is Vimbai, the best in Mrs. Khumalo’s salon. Vimbai is unmarried with a young daughter, but with a place in a good neighborhood, a house help and her job, things are going well and her talent draws customers to the salon. That is until another hairdresser, the smooth-talking Dumisani starts at Mrs. Khumalo’s salon. Initially theratening her job security and losing Vimbai her role of queen bee, she loathes Dumisani, but slowly the start becoming friends and when Dumisani needs a place to stay, Vimbai becomes his landlady.

Huchu’s first novel is set in post-apartheid Zimbabwe during mounting economic problems and a 90% unemloyment rate. Vimbai and the other women in the salon are trading petrol and sugar and there are problems with white farmers trying to hang onto their farms after independence while government officials are seizing the property. These issues are very much present but the “issue” focus of The Hairdresser is on homosexuality, its illegality and views of gay men as “lower than pigs and dogs.”

I very much enjoy characters that are not easily likeable and Vimbai with her pride and some terrible mistakes is a complex character and it is great to see her grow and become more aware. Her views will often be hard to take but the author shows where she is coming from and presents the difficulty women like Vimbai experience at the hands of men.

While Vimbai and Dumisani become closer and Vimbai is enthusiastically embraced by his family, as readers we can see where their thoughts on their future diverge. Dumisani brings larger issues into Vimbai’s life and from there things begin to unravel. I feel that perhaps the ending could have benefitted from a few more pages, it is a bit sudden but perhaps the salon life and little power struggles between the hairdressers in the first half of the book were just that well-written. The novel has been described as “bittersweet,” and this is a fitting term, so enjoy this one but be prepared for some bitterness.

This is a difficult one to write about without spoiling too much! I hope you’ll give the book a try, I know I’ll look out for Tendai Huchu’s future works! I chose The Hairdresser of Harare for Kinna’s Africa Reading Challenge and I think it might actually be the first book set in Zimbabwe and also written by a Zimbabwean author that I’ve read. But I do have another one, We Need New Names by NoViolet Bulawayo, on my list.

Reading on a Rainy Day

Have you read this book? Let me know and I’ll add a link!

17 thoughts on “Thoughts: The Hairdresser of Harare”