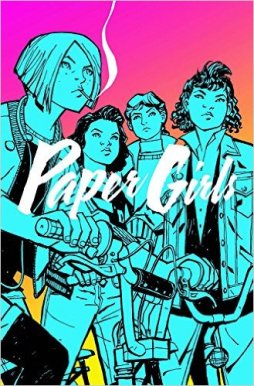 As you can see, I’m still in my exploratory comics phase. This time I have even tried a comic set in the 1980s! I know, right! Not at all my favorite decade. But I was told there’d be dinosaurs, so here I am.

Paper Girls is another work by popular writer Brian K. Vaughan, he of Saga fame, wonderfully drawn by Cliff Chiang and with the most amazing color palette courtesy of Matt Wilson. Started in 2015, this volume collects the first five issues, and the story is apparently already plotted with quite a few more issues planned.

Set in 1988 Ohio, the story stars a group of 12-year-old girls who deliver the newspaper on their bikes. Mac, Tiffany and KJ are joined by “new kid” Erin and they make their rounds together in groups. The story drops us right in the middle of Halloween night and it soon becomes apparent that very strange things are at work.

First, our protagonist Erin has a weird apparently recurring dream about an apple and aliens and a sibling in hell. I had no idea what was going on and to be honest it just got a lot more crazy as I read on, so I still have only an idea of what all is happening. The paper girls crew saves Erin from some teenage dude who is harrassing her, sadly with unnecessary use of homophobic slur. At least Erin intervenes, educates Mac on this issue and there’s a nod to LGBT history. Still could’ve done without this. Cue some weird wrapped up ghost speaking an unidentifiable language stealing one of the girls’ walkie talkies, cause this is he 80s. There’s strange technology and some new strangers appearing in astronaut-like gear, barding it up in some futuristic Shakespearean language and riding pterodactyl! Which is super cool, but they also appear to be the villains. We’ll see!

As you can see craziness in plot abounds! The imaginative world-building is awesome, but it’s also a lot of stuff piled up and we don’t get to see it go anywhere much at the end of the volume. I can only hope that volume 1 is similar to a pilot and the next issues will show a clearer path with more concrete plot lines. But I’m willing to suspend judgement and wait how it all unfolds. 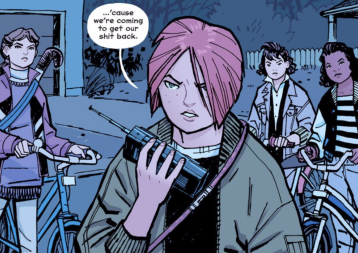 Our main characters are a group of very different and happily somewhat diverse preteen girls. This is pretty great as this group doesn’t get much limelight in comics to my knowledge. Their dialogue is spitfire, and lively, but apart from Mac’s hardened attitude they are not yet round enough characters to rest the crazy plot on. I really enjoyed seeing a bit of their complicated home lives and in the case of Mac, what’s behind the front she puts up. The cliffhanger at the end of the volume shows that we might be confronted with different sides to these girls and hopefully this will make them stronger characters, #6 needs to step on it!

Considering this a long pilot, I will give Paper Girls Vol. 1 a generous 3.5 star rating. The preteen protagonists and the different groups of strangers as well as the apple(icon) disk the girls find hint at a generational conflict of epic and timey wimey proportions. I’m really interested in finding out how this plays out, so if I manage to get my hands on the next issues, I will definitely read on.  But don’t go into this expecting something epic like Saga, perhaps Paper Girls will develop into an amazing comic but it’s not there yet. Being a science fiction comic about four girls, I’m also disappointed to see that the creative team is made up solely of men. They write and draw these girls well, but there are currently enough men publishing comics, it’s time to let women tell their stories.

Are you a fan of the 80s? What’s you favorite book set in or from that time?

Have you reviewed this work? Let me know and I’ll add a link!

Source: I received Paper Girls Vol. 1 as an egalley, thanks to NetGalley and Image Publishing. But I’ll remain my opinionated self!