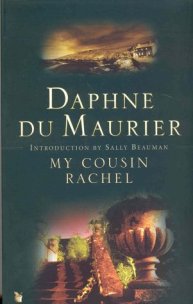 My Cousin Rachel is, I think, the fourth novel I’ve read of DuMaurier and again I’ve teamed up with Jo from Bibliojunkie for a read-along of DuMaurier goodness. I have to say that this is one of those books I’ve been wanting to read for a long time, but have put off many times because I didn’t want the anticipation to be over. Still, I had to give in at some point and I’m already looking forward to a slow reread.

My Cousin Rachel was first published in 1951 and is like so many of DuMaurier’s works set mostly in Cornwall. Rating-wise I have to say it comes in a very close second after Rebecca.

As for the story: Philip Ashley grows up in the all-male household of his Uncle Ambrose, groomed to take over the estate after his guardian’s death. However, when Ambrose takes a trip to Italy, he meets and marries ‘cousin’ Rachel and shortly after dies abroad. Devastated and alarmed by a letter his uncle sent him before his death, Philip travels to Italy. However, Rachel has disappeared and before long, she shows up on Philip’s doorstep in England.

This book is just as perfect about atmosphere as Rebecca, it’s nearly a character of its own! It is also a fantastic mystery with so many layers and twist and turns that I couldn’t help but race through it (my thesis be damned!). It also makes for a wonderful study about youth and models of femininity and masculinity. The story is told from Philip’s perspective, who is young, has grown up without significant female company and has introduced himself as something of a dreamer. As such, he is more than a little unreliable and his descriptions and thoughts of Rachel really say much more about himself than his ‘cousin’. He has more or less internalized Ambrose’s distrust and fear of women and his friendship with the daughter of a neighbor is that of siblings, so when he is confronted with half-Italian Rachel, it throws him badly. Even without his uncle’s mysterious death I think this would have made for an interesting story. As it is, My Cousin Rachel has it all – suspenseful mystery and study of gender representation.