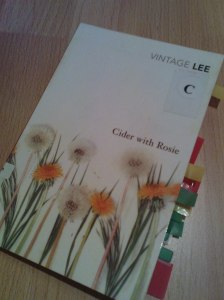 I never underline passages in books or write in the margins, it seems sacrilegious somehow. I´m not quite sure why this matters to me, because I don´t treat my books super carefully in any other regard. I break the spine (gasp, I know), dog-ear them and generally put them through a lot. How do you treat your books?

This habit come in handy when I read library books, but I still want to note down my favorite passages and so I use post-it markers. (I carry a pack of them with me and even keep some on my bedside table). As a result the books I´m reading often look like in the picture 🙂 Can you already tell that I loved Cider with Rosie?

Cider with Rosie is Laurie Lee´s memoir of his Cotswold childhood. In thirteen quasi-episodes he describes his chaotic but loving family, the village eccentrics, the beautiful Cotswolds, and more. The narrative spans the years from when Lee is about three years old and his mother and his siblings move to the village until shortly before he “walked out one midsummer morning”. Lee´s prose is unbelievably beautiful and his background as poet is very noticable, that combined with the landscape and life he describes makes for a book that appeals foremost to the senses.

Lee´s childhood must have been hard a lot of the time, there was never much to eat, no electricity, icy winters, and young children often did not come through. His mother also had to raise three daughters of his father´s previous marriage as well as her three sons, while their father left to live his own life apart from them. Despite the circumstances, Lee´s love for his family and his village shines through on every page. He does not gloss over ugly truths such as death and crime and incest in village life and gives what I think is a fairly accurate description of English  village life around 1920s, before modern life and inventions burst in and changed it forever.

Some of my favorite passages:

“Jones´s terrorist goat seemed to me a natural phenomenon of that time, part of a village which cast up beasts and spirits as casually as human beings.” (32)

“Even so such outbursts were often contagious and could lead to waves of throat-cutting; indeed, during one particularly gloomy season even the coroner did himself in.” (108)

“When she tired of this, (mother)´d borrow Dorothy´s bicycle, though she never quite mastered the machine. Happy enough when the thing was in motion, it was stopping and starting that ouzzled her. She had to be launched on her way by running parties of villagers; and to stop she rode into a hedge.” (125)

“The fresh boiled egg tasted of sun-warmed manna, the cocoa frothed and steamed, and the bread and butter- cut invalid fashion- was so thin you could see the plate through it.” (166)

“The day Rosie Burdock decided to take me in hand was a motionless day of summer, creamy, hazy, and amber-coloured, with the beech trees standing in heavy sunlight as though clogged with wild wet honey.” (207f)

“Never to be forgotten, that first long secret drink of golden fire, juice of those valleys and of that time, wine of wild orchards, of russet summer, of plump red apples, and Rosie´s burning cheeks.” (209)

This is one book that I can highly recommend! The loving description of nature and the free-spirited mother put me in mind of I Capture the Castle, they evoke a similar reading mood.

18 thoughts on “Review: Cider with Rosie”